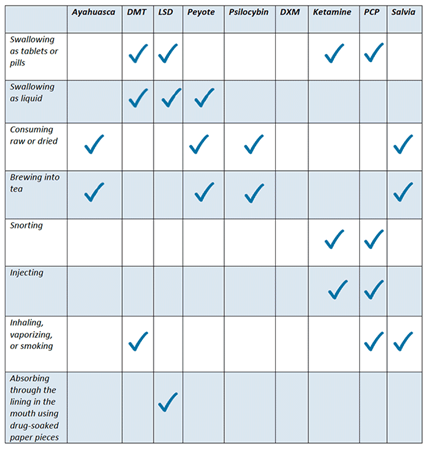 How do hallucinogens affect the brain?
Research suggests that hallucinogens work at least partially by temporarily disrupting communication between brain chemical systems throughout the brain and spinal cord. Some hallucinogens interfere with the action of the brain chemical serotonin, which regulates:     Other hallucinogens interfere with the action of the brain chemical glutamate, which regulates: Short-Term Effects
The effects of hallucinogens can begin within 20 to 90 minutes and can last as long as 6 to 12 hours. Salvia's effects are more short-lived, appearing in less than 1 minute and lasting less than 30 minutes. Hallucinogen users refer to the experiences brought on by these drugs as "trips," calling the unpleasant experiences "bad trips."
Along with hallucinations, other short-term general effects include:     Specific short-term effects of some hallucinogens include: Long-Term Effects
Little is known about the long-term effects of hallucinogens. Researchers do know that ketamine users may develop symptoms that include ulcers in the bladder, kidney problems, and poor memory. Repeated use of PCP can result in long-term effects that may continue for a year or more after use stops, such as:     Though rare, long-term effects of some hallucinogens include the following: What are other risks of hallucinogens?
Other risks or health effects of many hallucinogens remain unclear and need more research. Known risks include the following: Are hallucinogens addictive?
Evidence indicates that certain hallucinogens can be addictive or that people can develop a tolerance to them. Use of some hallucinogens also produces tolerance to other similar drugs.
For example, LSD is not considered an addictive drug because it doesn't cause uncontrollable drug-seeking behavior. However, LSD does produce tolerance, so some users who take the drug repeatedly must take higher doses to achieve the same effect. This is an extremely dangerous practice, given the unpredictability of the drug. In addition, LSD produces tolerance to other hallucinogens, including psilocybin.
On the other hand, PCP is a hallucinogen that can be addictive. People who stop repeated use of PCP experience drug cravings, headaches, and sweating as common withdrawal symptoms.
Scientists need more research into the tolerance or addiction potential of hallucinogens.
How can people get treatment for addiction to hallucinogens?
There are no government-approved medications to treat addiction to hallucinogens. While inpatient and/or behavioral treatments can be helpful for patients with a variety of addictions, scientists need more research to find out if behavioral therapies are effective for addiction to hallucinogens. 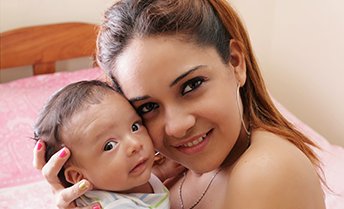 "Before Visions, I was a mess. I had lost all hope. I now have my life back." - Former Client